This past weekend was so filled with goodness that it’s hard for me to even put together a blog post, but here are some of the highlights! Saturday was such a whirlwind of awesome. We started off visiting The Catacombs, which I’ve decided is one of the creepiest tourist attractions I’ve ever experienced.
Why waiting for an hour to see the skulls and bones of dead people is a thing, I may never know, but it’s one of those experiences that you’ll never forget (and can always brag about – which is a win! 😉 ) The experience itself consists of walking down down down into the depths of the earth and then coming out on piles and piles of bones, murky lighting and extremely humid recycled air. I wouldn’t suggest this attraction for anyone who experiences fear of being underground or claustrophobia. The key, though, is to not think about how far you are underground…or the fact that you’re walking through a tomb of millions of dead people.

After the Catacombs we jumped over to the Luxembourg gardens (after devouring some crepes, which are pretty much my Paris addiction) and hung out there a while. The steps up and down into the pit of The Catacombs was definitely a workout, so it was nice to sit down for a bit. The only danger of three American girls in the gardens, though, is French guys thinking the “nice American girls” are the perfect target for potential kisses and practical jokes. ” But we took it in stride. Maybe American girls are just really nice.

Our next stop was the home of Ernest Hemingway, and I would be lying if I said it was anyone’s “fault” other than mine that we went there. Hemingway is kind of a literary crush of mine (the geek in me is showing) so being able to stand outside his old apartment, in the neighborhood he called home was pretty incredible. There was even a cafe underneath the apartment which he wrote about in his book A Moveable Feast! Definitely worth the extra trek over there from the gardens.

Overall the day was just jam packed with fun and awesome memories. I’m so excited for the days to start getting warmer as spring arrives in Paris. We’ve all been a little cooped up over the winter months since it has been absolutely frigid, but now we can go out and see more of the city! More adventures to come! 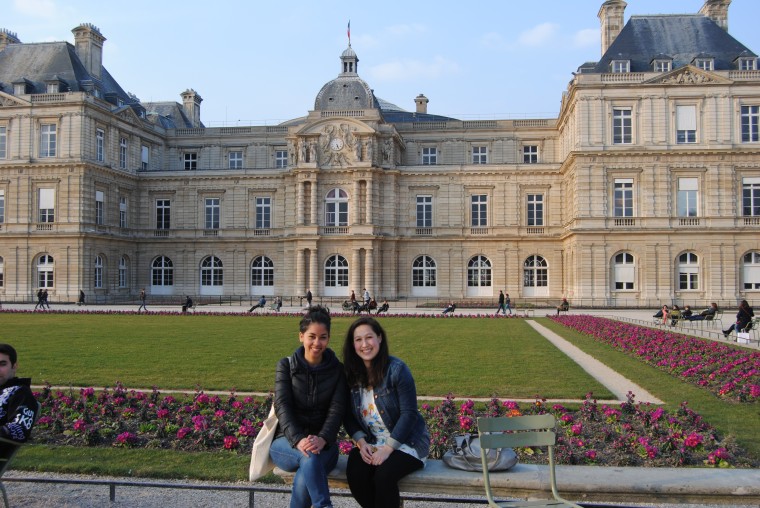 One thought on “Day in Paris: Catacombs, Hemingway and Luxembourg Gardens”