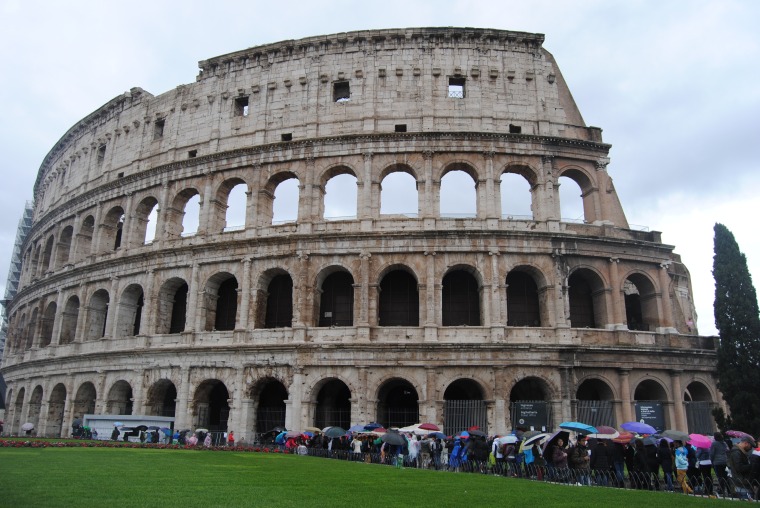 They say that to truly feel alive you should do things that scare you. Today is my day.
I’ve been pretty terrified to go to Rome for a while. Big cities in general terrify me, but with other cities like LA, London or Paris I’ve always felt a little more at ease since I speak the language of each of those places.
I don’t speak a word of Italian. In fact, I can barely spell Italian (I keep writing it the French way). When I was in the airport I actually had to stop and mind swap over because the people boarding with me were (of course) speaking Italian and I seriously had to stop and think about what Italian sounded like. When was the last time I heard actual (not 9th generation Italian-American, sorry guys) Italian? I honestly can’t think of a time. Which kind of makes me sad, because I really like Italian as a language. It just really isn’t that prominent in the past of the US where I’m from, but I never realized that until today.

This morning I woke up at 5am with birds chirping and a full moon outside my window. It was eerie, but also kind of nice to get to watch the Easter sunrise. HE IS RISEN!
I love Easter so much because it’s just a huge party – it is hard not to be with my family this year because this is one of the three times per year that I usually get to see everyone. What I wouldn’t give for a plate of Morehouse deviled eggs. Yum.

But this is the year of doing things a little different. So I’m currently sitting on an airplane to Rome, Italy. Which is insane. The trip was pretty sporadic because I just found out earlier this week that I had a three day weekend off. While I was looking up places to go I knew Italy was next on my list of places to visit, but I was torn between Venice, Florence or Rome (or Milan just because it’s close and cheap) but after thinking it over, and looking up each city, I realized I would never forgive myself if I didn’t go to Rome.

So I bought the hefty ticket (everything was overpriced for the holiday weekend, but in comparison to traveling from the US obviously it’s like nothing no matter how high you buy flying from Paris) and I immediately knew it was the right choice. The hostel situation in Rome this weekend is madness. It took me two hours of sifting through every possible place before I finally found a hostel that fit what I was looking for. It was the last bed in the place, and I can only imagine what the city itself is going to be like when I actually get there. It’s funny, but I already feel like I want to go back to Italy and I’m not even there, yet.

About the airline I’m flying: This time I decided to try out the Spanish owned airline Vueling. I honestly had no idea what to expect since the airline is fairly new and there wasn’t a lot about them online, yet. But I love it (especially in comparison to RyanAir). The staff is so nice, and they actually seem to like their jobs. The atmosphere of the plane is great, hipster approved music is playing and everyone seems to be having a great time. The one warning I would state is that, if you’re on the taller side, make sure you have an aisle seat – the leg room is the only not so impressive aspect of this airline. If you’re smaller, though, you’re good to go. The nice thing to remember, also, is that the flights are only around 1-2 hours long. So if you do end up feeling cramped, it will only be for a short while. I lucked out this trip, though, because both of the seats next to me are open, so I’m the queen of row 29 A-C (also window seat – eeeeee! 🙂 )

The one downside of this trip is that Paris is gorgeously sunny today, and Rome has supposedly inherited the rain we’ve had all this week for today. But it is supposed to be sunny tomorrow, so I think it will still be a great trip! Ciao!