I’ve always wanted to go to Norway. It’s the part of my heritage on my mom’s side that I’m the most connected with mainly because that side of my family NEVER stops talking about it. We’re very proudly Scandinavian and I think it was growing up around that mentality that made me want to visit this place so bad.

And now here I am.

The last couple a days have been a jet-lag blur, but today some clarity finally started to break through. I took my time getting ready this morning and finally made my way over to the Oslo Opera House around noon. The building reminded me a lot of the Titanic Museum in Northern Ireland mainly because it too is shaped like an iceberg, and it was also just really nice to sit by the ocean during the few moments of blissful sun.

The opera house was also the starting place for my walking tour, which I booked through Airbnb Experiences. Airbnb is currently one of my favorite places to find experiences in cities because it matches you with actual professionals in the space you’re hoping to enjoy (with the exception of Riga, Latvia which didn’t have any experiences available…sadness). In the past, this was how I found my hat making experience in London, Yoga in Paris, and my most picture famous experience: Royal Day Out. For this trip I have an travel journal class scheduled for tomorrow, in addition to my walking tour today and a photo shoot in London the very last day of my trip.

The tour today was two hours and walked around the city throughout it’s historic center and on to City Hall. The walk was super lovely even though my legs are dying because I’ve been sat behind a desk for way too long (by the end of this trip I fully intend on having power thighs again…especially since I’m walking 5-10 miles each day). The best value of the walking tour, though, was having a Norwegian native I could talk to. I loved the knowledge of my host and she peaked my interest about my own family enough for me to start asking my mom more questions. It turns out that our family DOES have census records that were shoved into a box somewhere that tell the exact Norwegian city my great-grandpa was born in.

I won’t have time to visit it this trip, but you KNOW I’ll be going there in the future. Another fun thing I learned today was that the traditional dresses/suits you see in Norway are very specific to cities/regions. VERY specific. As in, you can actually get in trouble if you wear one that’s not where you’re from. I’m so glad I found this out because I’ve been wanting to make a traditional dress from Norway for about four years and I haven’t had the information of which style I should make. Well. Guess what guys? Now that I know the city I know exactly what design is ours, and I couldn’t be more excited.

It’s crazy, but the design that is specific to our region is EXACTLY what I would have chosen if I had all of the Bunad designs lined up: Classic with a whole lot of extra. 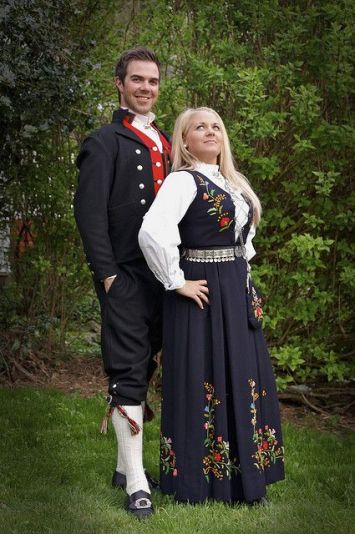 Another really amazing part of my walking tour was getting to see the building that Norwegians emigrated to the U.S. from back in late 19th, early 20th, century. It’s still there. It was pretty crazy to think that over 100 years ago my great-grandfather (who shares my birthday, by the way) was more than likely standing at that building where I was standing. And it’s even MORE crazy to think a journey I took in half a day took him weeks, landing in a country that changed his last name and told him to “Go West Young Man!”

Our family made enough of a living in the U.S. but I know that there wouldn’t have been enough money to even consider returning to Norway for a visit. Especially not with his nine children. Yeah, NINE. I wonder if he ever wanted to come back? Probably. As far as I can tell the only reason to leave Norway during that time was because there wasn’t anything for people to do here and the country was dismally poor. But to leave your home and everything you know is not easy (as I know in a way less permanent way by moving to France) and I’m sure there were moments where coming back to visit was something he wanted more than anything.

It’s so odd to be so intimately connected to a place that I had never been before, but that’s one of the reasons I’ve wanted to make visiting places like Ireland, England, Scotland, Denmark, Germany, and now Norway, a priority. I’ve said it before, but visiting the places your family is genetically tied to does something to you. It awakens something. And it’s really hard to explain I guess unless you’ve experienced it, but my sincere wish is that we never forget our roots…because where we’re from matters. And it’s a more intricate part of who we are than I think any of us realize.

2 thoughts on “Norway: Returning To My Family’s Roots”