I’ll admit it: Growing up, I was the goodie two shoes. I never really got in trouble, I didn’t experiment with illegal things or have dangerous friends. I got straight A’s and never missed a day of school.

In the grand scheme of things, I guess you could say I was a low-key, kind of “boring” kid. I was my high school class speaker, voted “most eligible bachelorette” in college (remind me why this was a thing, SPU?), and never touched alcohol until I was 21 (short-lived, since I stopped drinking at 22).

Why am I telling you this?

Well, the life of a traveler is definitely not a safe one. While on the road I’ve had some pretty scary, sketchy and downright dangerous stuff happen to me. But usually this blog only gets the fluff and smiles of the good days.

So, what turned this girl from yawn to yeeeeessssss? Here’s how it happened.

It all started back in 2013 when I met a boy. Yep. I know.
This boy was very very important to me, but ended up ripping my heart out and basically making me wish I was never alive…but that’s another story.

Anyway, after that experience I realized how much of my life had been about pleasing other people. This was also right about the time I had shaved hair, started getting tattoos and pierced my septum. Was I cool, yet?

But that wasn’t enough. I had wanted to travel to Ireland since I was a little kid. My grandpa is Irish, English and Scottish and I’d grown up associating a good story and a great (albeit corny) laugh with my Irish heritage.

I had basically all but planned the entire trip out in my mind. And I was ready to go. But remember that boy I mentioned earlier? Yeah, you guessed it—he talked me out of going. Not only talked me out, but flat out told me that if I did go he would break up with me. Nice guy, right?

So, naturally, the first thing I did after the *KABOOM* ending of that relationship was to buy a plane ticket. By myself. To Ireland and the UK.

Since that first trip I’ve learned a lot about myself, but one of the biggest things is how much fear held me back from doing a lot of things in my pre-23 year old life. To be clear, there were some benefits to that. I probably wouldn’t have graduated from college without the fear that my mom would kill me if I didn’t (Haha. It’s a joke, mom.).

But when it came down to it, what I wanted for my life, and who I wanted to be, was so dictated by the surrounding fear of not being accepted by those around me that I didn’t even realize I could make independent decisions to make myself happy. It sounds kind of sad, now, but I don’t think I ever considered the fact that I should/could pursue the things that made me happy—even if they didn’t make sense to other people.

To those of you who might be nodding your heads, this one’s for you:

I’ve learned so much more (and grown so much more) by failing royally. Like I mean big-time fails. I mean moving to another country and hating almost every minute of an experience most people dream about, F-A-I-L.

But you know, I smile when I think back on my failures because they’re a reflection of just how far I’ve pushed myself to grow.

What is fear holding you back from?

Maybe it’s travel related (if it is, call me) or maybe it’s just taking a risk to apply to that job, or move to a new place. Do it. Not because you’re going to have a 100% success rate, but because even if you fail you still gain so much. Believe me.

If your heart is pulling (or in my case, dragging) you a certain direction in life, follow it. And those people who threaten to leave or abandon or not support you? Get rid of them. I’m serious. Shake them off, and find your people and a community to support you. Even if it’s an online community or Facebook group or whatever, there are people out there who will support you. I will support you.

So be your crazy self. Take risks, and live your life as fully and completely you. Not because everyone else is taken, but because you are f*cking fabulous (sorry, mom), and why the hell would you want to be anyone else?

In the land of unicorns, I needed a miracle. Two days ago I flew into Scotland and it has been such a relaxing and rejeuvenating time here. The first time I came to Edinburgh everything was kind of a whirlwind, so this time I switched things up to give it one more chance; different travel situation, different hostel, different part of town. I’m so glad I did because everything has been amazing.
To start things off, my hostel literally looks like I’m staying in 221B Baker Street, which of course makes me very happy. The carpet is gloriously red pepper red with beautifullly intricate floral wallpaper and red velvet curtains to the sides of each room’s windows. Every time I go up or down stairs there’s just a sort of magic that happens as I walk up the original (stunningly beautiful) spiral staircases. This hostel was advertised as “not a party hostel”and I’m so happy I jumped on that boat asap. The reception closes at 10pm. The common room closes at 10pm. And pretty much all of the lights on our residental street are out by 10pm.

This means that getting a goodnight’s rest is a lot easier. Although I’ve been fighting jet-lag more this trip than I usually do. This morning was the first “normal night of sleep.” And that means I went to bed at  9pm and woke up at 3:30am. Solid.

But I do feel much better, today. When I first flew into Edinburgh I checked into my hostel and then pretty much immediately went to  bed for 10 hours. It was a riveting day. By the time I woke up, it was 10pm and the entire world had shut down, so I spent some time online, then went back to sleep.

Yesterday was much more eventful, and brings me back to my need for a miracle.

The morning that I left Dublin I found out that my phone had stopped charging, but after trying a different cord it finally started. Which left me with a problem. How was I supposed to charge my phone? The obvious answer was that I wasn’t going to be able to, since I couldn’t take the working cord with me. So when I got to Edinburgh I bought a new one, thinking my problems were solved. Why are problems never easily solved, while traveling?

And since my phone is not only a communicative device, but something I use for music and photos while traveling, I was pretty upset. So I just left it plugged in the wall while I pouted, praying for a miracle (aka PLEASE CHARGE!). After a couple of minutes I saw that the battery had raised 4%. But there wasn’t a charging symbol on the phone. Weird. I checked back a while later and it had gone up a couple more – cool! Relief washed over me, but when I checked back an hour later it had only gone up 1%. Yeah, 1.

The moral of this story is be more specific in what you wish for. I got my miracle, my phone is charging, but at  rate of 1- 5% per hour. Yep. This is real life. In context, my phone is almost 4 years old and so it was time for a new one, but I was hoping to make it through this trip before shelling out for one. The phone had other plans.

Other than the phone crisis of 2017, yesterday was a lovely day. Scotland has been completely sunny (if windy) since I’ve been here and it has been glorious. Snow is on the forecast, but I’m hoping it won’t be enough to delay my flight out to Copenhagen tomorrow.

Yesterday I continued a project I started in Dublin, where I meet someone for coffee/tea in every city I go to. This has proven (already!) to make this trip amazingly more enjoyable and I definitely plan on writing up a blog post on the amazing women I’ve met. I already feel so inspired by them and I know you will, too! 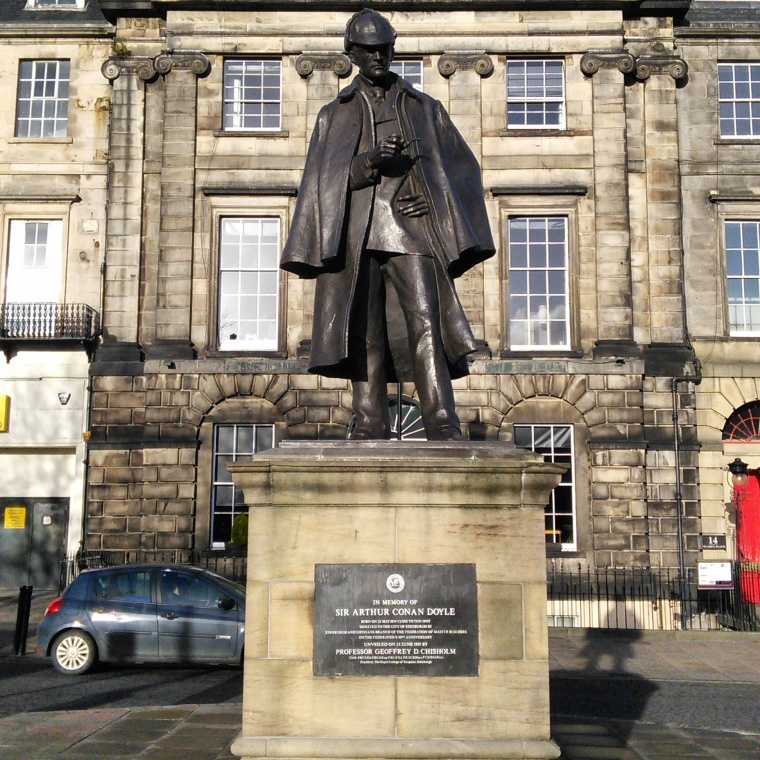 Pre my tea session I got terrifically lost trying to find a rather obvious statue of Sherlock Holmes. I’m not going to play coy here, I literally walked right past it. And while I can probably partially blame that on the jet-lag I think it’s also safe to say that I “saw but did not observe” my surroundings.

I did finally find the statue, after stopping in for a cup of tea at a literal hole in the wall coffee shop, and it was such a great feeling of accomplishment. If I had had mortime I would have loved to stop in at the Conan Doyle pub across the street, as well. I would also like to note how much I love that I can just order “a cup of tea” and everyone knows what I want, here. No fusions, no ice. Just a cup of tea (meaning black tea for those of you who are wondering what on earth I’m spouting on about).

Post my meeting with a lovely fellow traveller I stopped in at the National Museum of Scotland, which is just as impressive as it sounds. Good grief. I only had an hour and a half to go through, but I have a feeling I could have easily spent days in there and still have not fully seen the whole thing. My favorite parts that I did see, however, were the exhibits on the history of Scotland (which was basically just me fangirling over historical events that happen in Outlaner), the fashion exhibits (because I love clothes and I love stitchwork more than anything) and the natural history part of the museum, which was filled with animals that were stuffed and a t-rex skeleton that reminded me of Night at the Museum. Also it was absolutely free to visit, which is a trend that makes me extremely in love with Europe and extremely dissatified with American museums. I just don’t think people should have to pay an arm and a leg to learn about the history of their country, or art. End of rant.

I’m really lucky, this trip, because I’m staying on the other side of what’s called “The Meadows” (#creative) which is exactly what it sounds like, but is also the most serene thing ever. I love seeing miles of green every time I walk back to my hostel, and I love that there are acres of green between me and the tourist bustle of where I was staying last time. All in all I’ve very happy to be staying where I am.
Today I’m taking an adventure up to The Highlands of Scotland, which is probably going to melt my heart, I’ll be so in love with everything. They’re not for everyone, but I absolutely love bus tours around countries. With a good book and an insatiable curiousity for history, they’re one of my favorite things to do.

Have YOU been to Edinburgh (or Scotland)? I’d love to hear any fun stories or things you saw that made you love (or hate) the place. Comment below and share your story! (Like really, I wanna hear all about it.)