I definitely don’t live a standard life. And the thing about being a risk taker is that sometimes things fall short. And other times, everything falls short at the same time. Which is pretty much what happened last week. Let’s just say a lot of things crashed and burned. But that’s life, isn’t it? One minute everything is one way, and in an instant shit changes.

Since it seems like a lot of people in my life are experiencing chaos hitting the fan, I thought I would share some of my go-to techniques for staying grounded when life isn’t playing nice. Here they are, in no particular order:

I’ve loved gardening since I was born. No joke. I think my love of gardening came from my Irish/English grandpa who always had a massive garden and would teach me how to take care of each plant and honor the earth it was planted in. Being around plants soothes me. At the moment I’ve created a bit of a garden with some vegetables, roses, herbs and the most beautiful hydrangea ever. When I’m feeling super stressed out I go and sit out on my porch and just take in the reminder that growth will still happen, no matter what life feels like at the moment.

I own more books than is probably healthy, and I try really hard to manage my addiction to buying them. This one I blame on my mom, since I grew up with an entire library to choose from. I love the wisdom and dependability of books. They’re still going to be there waiting for you to learn, or love, or let you leap into a fire pit to save an entire world. Who cares how your day way? There are adventures to be had. Right now I’m reading these books:
The First American
How We Got to Now
The Name of the Wind

If you’ve followed along on this blog for a while, you know that I’m a Christian and my faith is a really important way for me to bring balance to my life and worldview. When things get hectic and chaotic I take time to step back. I turn off my electronics and meditate to recenter. I think this is a really important part of being human, whether you’re connecting religion to it or not. Because when we find peace in ourselves, the outside world has a way of falling together, as well.

I’m an artist and I do art. A lot. Whether it’s knitting, crochet, painting, cross-stitch (my latest craze), sewing, or making a recipe from scratch, creating with my hands brings me back to my center and calms me. I’ve always been like this, and I think it’s the same for a lot of people in my family. We’re makers. It’s in our DNA. We couldn’t stop even if we wanted to.

5. Standing on my bed and lip syncing to Miley Cyrus

Ha. Ha. You thought these were all going to be adult and normal. Gotcha! I’m a huge Miley Cyrus fan (judge me if you must, you scoundrel) and I’ve found that her album Bangerz is just about the perfect lip syncing music to get that “F U” attitude off your heart. Be thou warned, that these are explicit lyrics. But, ya know, sometimes you need so yell a few swear words to get your mind back on track. The point is, have fun. You’ll be amazed how much of a difference it makes.

What do you do to re-center yourself? I’d love to hear about it! 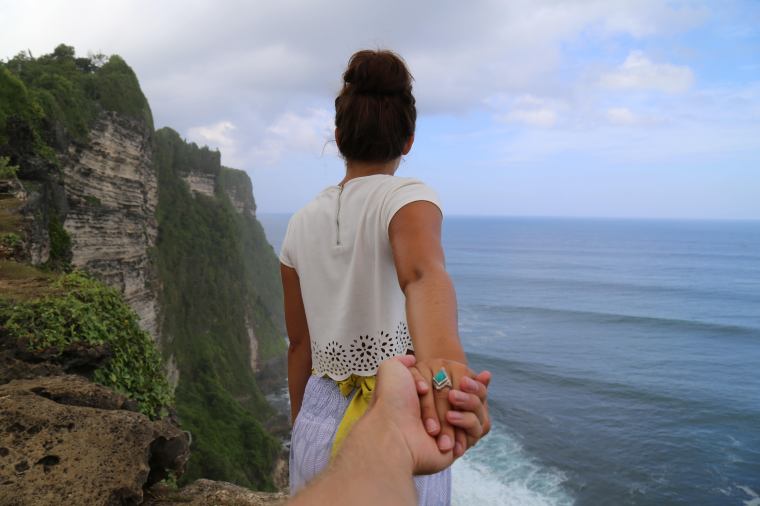 What if I told you that you can travel without ever leaving your neighborhood?

Traveling is a big part of my life. Obviously. I spend hours each week blogging, researching and Tweeting about it. But the reality of the situation is that not everyone can just throw some stuff in a bag and hop on a plane, which is something I’ve been very fortunate to have done on multiple occasions. Right now, however, I’m in a bit of a hiatus for travel, or at least long trips, because I’m paying back the student loan gods and getting settled after a year of living in one of the most expensive cities in the world.

But back to you. I know there are a lot of you who love travel, but may not be able to right now, so I thought I would share some of my tips for curing (at least temporarily) the travel blues. Ready? Okay, here we go:

You know, those tiny little scraps of paper that you pray will go where they’re supposed to because, let’s face it, there’s no return address. Yep, those. I love postcards and I probably always will. When I was a kid I used to had a penpal, and that’s probably where my love for snail mail originates from, but I think I also just like being able to talk to people without talking to them (if I’m honest) #introvert.

The best part of sending/receiving postcards is that you don’t have travel somewhere in order to send them. No joke! Try out a website like Postcrossing to send and receive postcards from people all over the world. How does this work?

2. They send you the addresses of a few people to test your commitment.

3. Once those people receive your postcards (which you’ve written a little code from the website, on) you start getting postcards and so forth and so on.

One time I got a postcard from Germany that led me to making a new friend in the U.S. and it was awesome. You never know what you’re gonna get!

But it’s TRUE! Reading is an amazing way to experience other cultures and places without ever having to leave your house (literally, just order them on Amazon – you don’t have to ever leave…except maybe health reasons).The best part of books (other than that they’re relatively cheap) is that they can actually inspire you to travel to other places, and make your trips more fun.
Right now I’m reading the Outlander series, and I’m seriously considering going to Scotland just so that I can visit all of the places. It makes you appreciate a place so much more when you’re able to associate happy reading memories with the real life places.

One of the best ways to get to know people who are different than yourself is to do just that…get to know people who are different from you. I’ve had a penpal for most of my childhood and again for the past year. She lives in Liverpool, England and due to the crazy of each letter taking 1-2 weeks to get from point A to point B, we don’t talk too often, but it’s the most exciting thing in the world to get a letter in the mail from England once a month!

If you’re still a little skeptical that pen pals are for kids, take a peek at the website that I used to get mine: Letter Writer’s Alliance. They’re dedicated to making sure snail mail stays in business, and it’s a pretty awesome community. Not only can you get matched with another member (lifetime membership is $5) but you can also check out their awesome letter writing merch (not required to write, just awesome) as well as local meet-ups and other events.

You know what they say: the people you surround yourself with influence your behavior. The best part of social media is that you can choose who you’re around and gain inspiration that way! Obviously, Twitter is my biggest inspiration with all +5,000 of my travel buds, but I also love Facebook groups, as well. Instagram is (obv) a really good source as well, but I’ve never really been in to Instagram, so that’s not as much my scene. Try looking at these Facebook Groups (or even join a couple!) for travel inspiration galore.

Travelettes : Launched in 2009, Travelettes is an online magazine/ travelblog/ network for and from girls who love to travel.

Nomadness Travel Tribe: The Nomad•ness Travel Tribe, created by Evita Robinson, stemming from her travel series Nomad•ness TV, is an online social community of travelers and expats all around the world. In the Tribe, they come together to share stories, advice, dos and don’ts, in an interpersonal setting. The majority of our members are bridged by an urban background.

Irish Central: IrishCentral is America’s number one news website for Irish news with over 3.5 million readers a month. (Also one of my favorite newsletters to get!)

Jetting Around: Jetting Around by Pola Henderson is a blog dedicated to cities and their culture. In addition to writing, Pola hosts a weekly city travel discussion on Twitter called #JAchat (Fridays, 1pm ET) and international networking events for travelers, JA Café: Travel Talk Over Coffee.

Travel Noire: Travel Noire is a digital publishing platform that creates tools and resources for the unconventional traveler.

The Exploress: Inspire | Share | Educate | Together we are a global community of young, creative and adventurous women who share a burning desire to travel.

Okay, so after I wrote up my last post I realized that I had a few more things to say: like that THERE ARE MORE GEEKY THINGS IN VANCOUVER TO TALK ABOUT! And these things I’m super excited to share! So, here’s the part 2 to my post from this weekend. Who knew Vancouver could have so many geeky things – I actually ran out of time to explore them all!

If you have anything that I missed, feel free to let me know in the comment section, below!

Obviously there are tons of shows that are being filmed in Canada, but most notably for me are the ones listed below:

The best part? You can follow along with WHERE these shows (and more!) are filming by stalking them with this handy guide!

Where To Find Some Geeky Reads:

The Vancouver library was built as a structure inspired by the colosseum, and it’s quite a spectacle. While I was a little bit skeptical from the outside, the inside of the library was stunning and SEVEN stories high! I’m not gonna lie, I felt a little sick when looking down through the all glass windows that surround one side. Every type of book you could imagine was there including some great titles that coincide with geek favorites, such as Game of Thrones and Lord of the Rings.

If you go to a bookstore for happy-go-lucky employees then you may want to stop by your local Barnes and Nobel, but if you’re there for the books this second hand book stop is amazing. Not only did I find a first edition copy of Outlander there for $5, but I also found some beautiful vintage Charles Dickens works for about $10. Some prices were weirdly high, but overall I think this is a great stop for book lovers. The best part? There are three other book stores within a two block distance that you can also walk to!